Why blocks are better than iPads 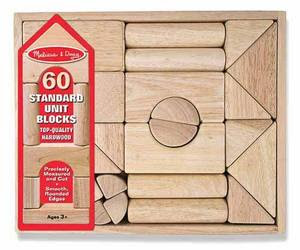 Yesterday I posted about a discussion on my email Mommy List, about whether or not the Feminist Pig should buy an iPad for her two-year-old son. Despite creating a ridiculously robust and rich environment for her child at home with her partner, my guess is that she felt she could further his education and understanding with a technological boost. Because More is Better, right?
Let's put the expense aside, or the idea that the $500 could be put to use feeding and building community, or accruing interest in a college fund. What's wrong with a little technology, here and there? Isn't it like having just a taste of cake, or just one cookie? Just a teeensy weeensy little dinner mint?
Well, as adults, our brains have finished their major growth. This wraps up around age 25. (Did you catch that? That experimentation in college maybe did cost you a few brain cells.) A little Cow Clicker isn't going to be as dangerous as it would be for a preschooler or toddler, whose brain is frenetically building neural roads for future commerce.
Before first grade, children learn by touching, feeling, experiencing and moving. Building with blocks, as the New York Times noted today builds excellent skills for problem-solving and processing previous experiences. Computers also don't allow children to develop their own rules about turn-taking, time spent, or being nice. These rules, called "executive functioning" skills, are a key predictor in academic and professional success.
By giving children open-ended toys then stepping back out of their way, you give them the opportunity to create their own rules and own their imaginative play. They create, rather than imitate according to a script. Sure there will be some imitation—Starboy makes us tea in his mudpie kitchen like Daddy makes tea, and he eats the sweet treats of occasional parties more often than, say, spinach patties, when he pretends. One of his favorite toys is a plastic box filled with rice, that he runs his cars through, pours, and touches. He also plays those games for sometimes 45 minutes straight, or two hours. He is frequently fully engaged in his toys and activities, rather than throwing them around in frustration, because they meet his developmental interest.
He does have his own iPhone—but since it's made from a block of wood, he only understands that it's a tool for calling Grandma and Grandpa, which is interaction with real people.
Should we expose our children to technology at all? Well....do they really need it? Is it really going to be such a detriment at school to learn how to pinch to make the page smaller in class, instead of during the sandbox years? As a friend of mine said, "People do seem to forget that this generation that feels so empowered by the techno age didn't grow up with it. They developed a relationship to learning and thinking before they picked up a computer."
And that's the whole thing for me. Starboy quickly will learn computer skills (and favorite TV shows) at any time we introduce him to the technology, just like our 80+ year-old neighbor who regularly posts on the neighborhood listserv. But the pathways for problem solving, critical thinking, and delicious exploration with texture and materials are built now, during this thin window of time. Robbing the child of this exploration—and replacing it with a mind-numbing drug—for the benefit of, maybe, a half-hour of quiet for Mommy, seems like it only benefits Apple in the long run.
But what did the Feminist Pig do, about her son's iPad? After vigorous discussion on the listserv with input from fans, foes, and fans who observed curious behavior in their children, ultimately she decided to guide the grandparents to a different Christmas gift this year, and buy an iPad for herself. She says she may share it with her son periodically when he is ready. But I suspect he'll be busy managing the family mulch pile and tending the chickens. They are Montessorians, after all, and an iPad doesn't really represent practical "work."
Related Reading:
Why Preschool Shouldn't be Like School / Slate
Can the Right Kinds of Play Teach Self-Control? / New York Times
Toddlers' Favorite Toy: The iPhone / New York Times
Who Taught Wyatt How to Write? / MariaMontessori.com
Digital Devices Deprive Brain of Needed Downtime / New York Times
Posted by bug at 1:29 PM