Shaving cream, be nice and clean..... 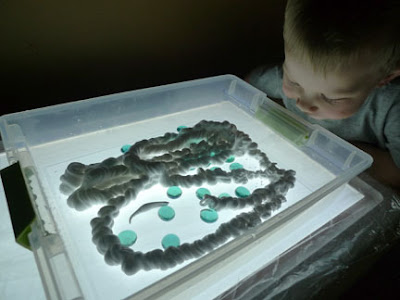 One of the great blogs I read is Play at Home Mom. They have really wonderful ideas for child-led exploration. The mom sets up an activity to "invite" the child to participate in whatever way he wishes. They have a ton of light table activities. I decided to try one with shaving cream for Starboy, who has been asking for something "new."
He started with glass bubble beads, shaving cream, and a few drops of yellow and blue food coloring.
Note: We do not have a cover for our light panel as described on Play at Home Mom, so I covered the panel with plastic wrap and made some holes for the vents. This turned out to be an excellent idea, as those creamy, puffy hands were clapping and flying, and so was the cream! 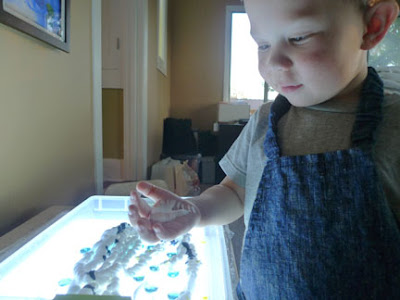 At first, he didn't really want to get sticky. He only had one hand in the box, and asked me to clean his hand. I told him we would clean it later. 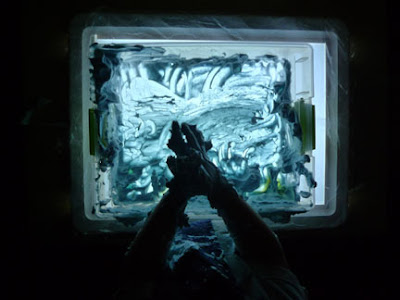 Starboy really doesn't like to be sticky, so I was surprised when he quickly had two hands in the box, mixing everything around. It probably helped that blue is one of his favorite colors. 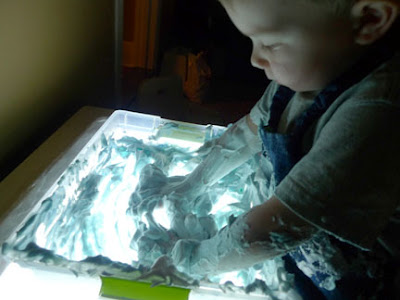 He kept asking for more shaving cream. The apron was sort of a joke in terms of protecting his clothes, but at least his arms were free to experience the whole thing. 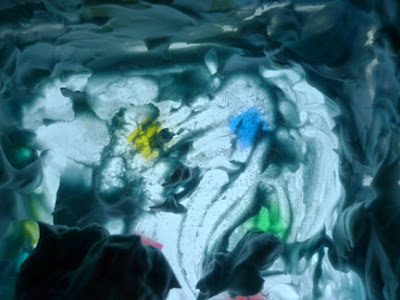 After a while, I added some colored tiles (from the overhead projector kit from my teaching days) underneath the box. By this time, the glass bubbles all were buried in the shaving cream.
Then Starboy asked for salt. He experimented with table salt and Kosher salt. He noted that the salt was "sandy," and kept asking for more. 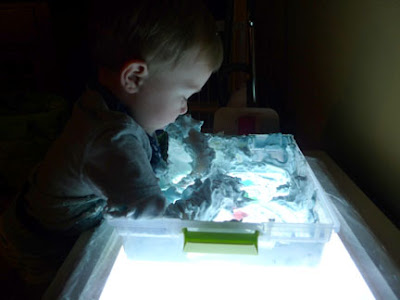 It really surprised me when Starboy basically tried to climb into the box several times. For a kid who doesn't really like to be sticky, he's really bringing it on. 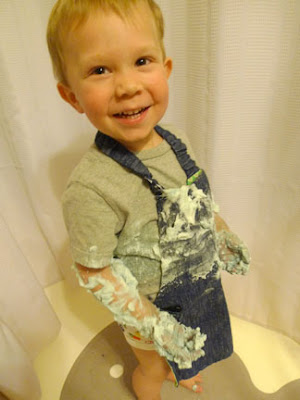 The last stop was the shower. I rinsed his t-shirt right away, and there seems to be only some blue staining on the sleeve from the food coloring. He was head-to-toe fragrant, which made bedtime a little too sweet-smelling for Daddy!
Posted by bug at 11:28 PM