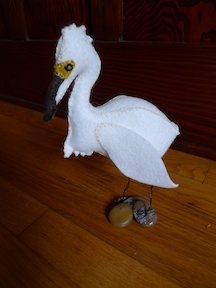 The river scene to promote the Waldorf-inspired charter school is, in my opinion, wholly inadequate without some authentic Los Angeles River flora and fauna.

So I worked to create a snowy egret for the scene. I started with this photo from the Bolsa Chica (I would like to find the photographer, to link back properly to his site and give him credit). 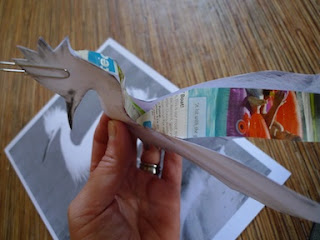 I couldn't figure out how to mathematically draw a pattern, so I built a maquette out of a printout of the photo and some structural elements cut from magazine paper.

This was a tremendous mindbender for me, and I have no idea how I can draw the final pattern and digitize it in a way that I can offer it to all of you so you can make one. Stay tuned on that. 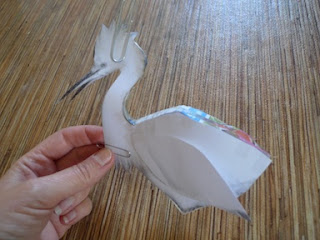 It turns out the bird I chose was showing mating plumage. Whoopsie. I went with it anyway. The next one will be plain. 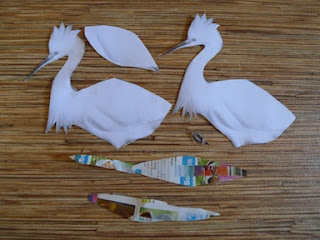 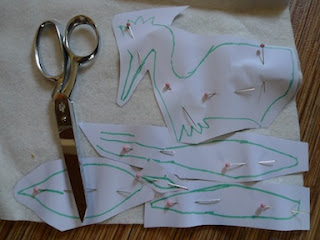 I traced these parts onto paper as a real pattern... 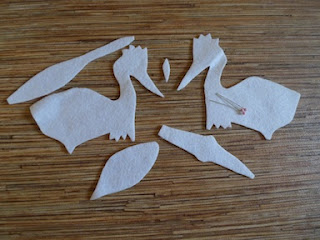 ...Then I cut them out of felt. And I started sewing. Maybe you can tell by the changing light in the photos, that this wasn't the speediest process. I started at the back of the crown, and sewed the forehead gusset first using a blanket stitch and embroidery thread. Then I sewed the back gusset, and started on the underside gusset.

As the body came together, I stuffed and sewed. I use polyfill. Wool is much better, but expensive, and since this guy is going to be out in public and could mysteriously disappear or become injured, I didn't want to really shell out on the prototype. In the end, I added a black (uh brown, I didn't have black felt) bill piece and a yellow mask. 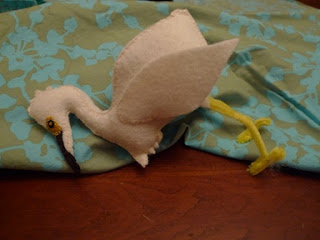 Unfortunately, I did not plan the legs before sewing the entire body closed. Organizational FAIL. The pipe cleaner legs with no platform to support the weight of the bird was a comically optimistic solution.

Techman suggested that I create a U-shape of wire inside the body to support the weight. Which I will be sure to do before sewing the body closed on the next snowy egret. 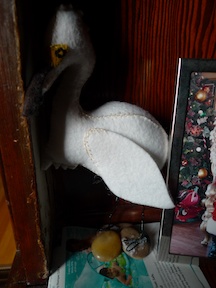 This time, I tried to bend the wires into a V inside the bird (each leg going through a tiny hole underneath. The wire is 20 gauge copper wire, doubled and twisted.

Then I glued the bird's feet to some flat river rocks (which are glued together) as sort of a stand. I leaned the whole works into a corner so it can — hopefully — dry properly.

I hope the next egret will be able to stand on his own. But for a first shot at pattern-making, I'm not disappointed with the results. Soup to nuts, this guy represents about four-and-a-half hours' work. Once the pattern is settled, I think new ones would come together much more quickly.
Posted by bug at 2:59 PM