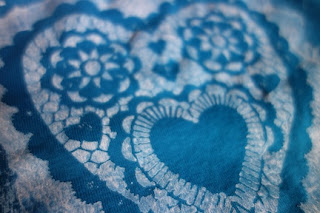 I've been waiting so long to make these doily print t-shirts (and maybe other stuff like this and this) from The Artful Parent. 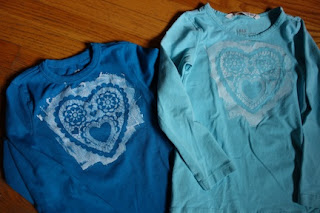 They turned out to be much more frustrating than they looked. 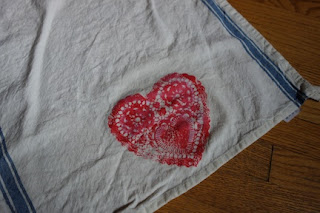 Luckily I ran some tests on paper with tempera paint, and then used the fabric paint to test a tea-towel. I ran the test after Starboy went to bed, and it was such a disaster, I decided not to offer it as a project for him and Mary Jane to do together. 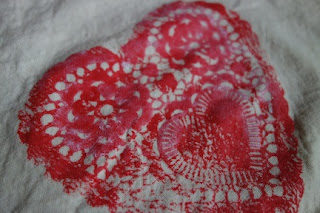 The prints were so-so, and the doily permanently adhered to the paint and the fabric. Impossible to remove. Except for the shredded, wet, sticky pieces I could pick off. I thought that by washing it the next day, or running it under cold water and scraping the pieces, it would be fine (as other commenters noted on Jean's blog), but the bits really just didn't want to come off. Frustrating.

Despite this bad luck, I soldiered on and tried the same technique on Starboy's t-shirt, and was surprised to get the same results! 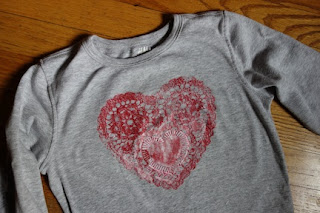 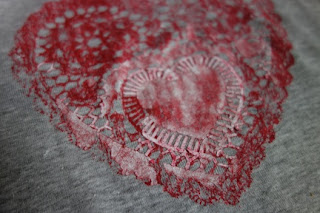 I decided to quit while I was ahead and leave it be. It actually does look a little cool, and he doesn't seem to mind. 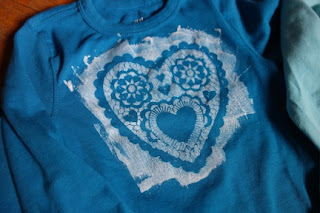 I wised up for Mary Jane's shirt. I had no problem applying the fabric paint to the doilies, and getting a lovely stencil effect. I was doing this on a piece of printer paper, and those lovely, shiny red stencils went to Miss Molly, to decorate her shop window.

So I used that as a technique on Mary Jane's shirt, and Leah's light blue one. Success! Very cute. And finally, as easy as previously described.

The conclusion I came to is: there are doilies, and there are doilies. I was using very thin paper doilies, and any bit of moisture caused them to disintegrate, and melt to whatever they were touching. There must be other, sturdier doilies out there. Or, if you wanted to take the time, I suppose you could cut a stencil using the doily as a pattern. But you'd have to be....I dunno...either childless or OCD to take that on, I think.

Then again, the issue could be with the paint. Maybe a different brand would have worked better, especially since the tempera paint didn't have this problem on the cards.

The shirts, btw, were organic cotton from H&M ($6), the doilies were standard issue (half off sale last year) and the fabric paint from Michaels ($4ish). Not sure that I can recommend the fabric paint, given my results.
Posted by bug at 9:46 AM