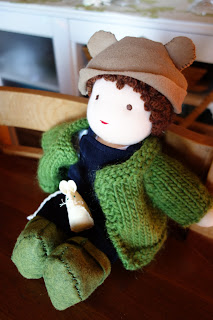 Specifically, he needed "Shoes, and a hat, and a white mouse. All white, with a white belly and white ears."

I need to note that since Dao does not have any wheels he gets pretty much zero playtime with Starboy. He mostly is stuck "supervising." But apparently he is hopelessly underdressed for this task. And in need of a mouse. Clearly.

So I used this pattern from Rhythm of the Home to hand-stitch some felt shoes. The pattern will seem freakishly big, but I only had to size it down a little bit for Starboy's 12" doll. Starboy loves that the shoes look like his own green fleece booties. I left the ties off to avoid frustration for him, but I suspect that this only will add the frustration of the shoes always falling off.

I used this pattern from Rhythm and Rhyme for this ridiculously cute mouse. Note that you can't use a piece of felt for the tail. We have found that it usually breaks right off. Microfiber works great, and on this one I tried cotton yarn, like you would use to knit a dishcloth.

I see now that I have been sewing the ears on wrong! Makes it look more like a bunny mouse. I'll pay more attention to that for the next one I make (they are addictive). 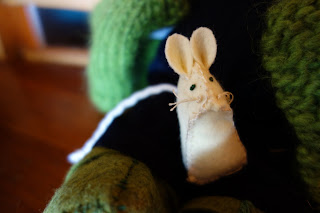 It would look much neater had it been stitched on a machine, but it was much faster to just whip it up then haul out the sewing machine and set it up. I had really wanted to knit it, but just didn't feel like starting a whole new project, since I'd have to do the math to create a pattern.

Now, Starboy says, Dao needs more clothes the same color as the hat. He pointed out five different beige felts and kept saying, "Like this color."

Does anyone have links for quick-sew 12" Waldorf doll clothes?