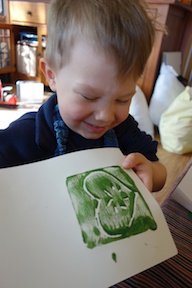 I've been dying to try styrofoam printing with Starboy for ages.  I got the idea from The Artful Parent. The results are fantastic! 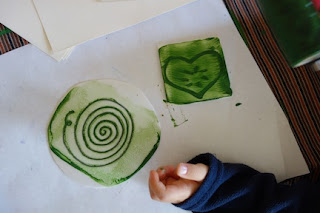 To hasten the process, I drew some shapes on the styrofoam in advance. This cut down on the number of steps to the process. I used washed take-out containers and styrofoam plates. This is the killer of the project, knowing you're using foam you are just going to throw out. If this concerns you, try to recycle some that will be tossed out anyway. 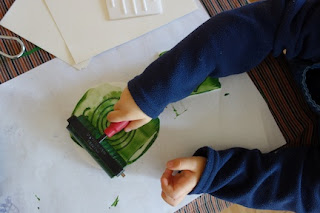 Starboy rolled the brayer through a glop of tempera paint. The paint is in a small, flat tray (recycled heat-and-serve mac & cheese container.)(Don't judge. You know it's delicious.) 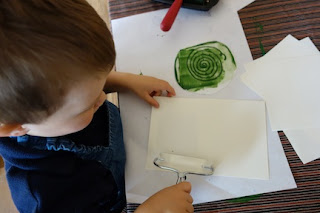 He laid a piece of paper on top of the wet positive, then rolled the back of the paper with a second, clean brayer. 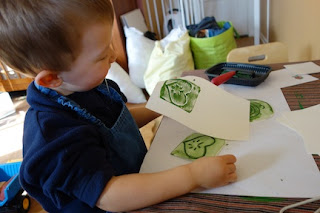 Carefully peeling away the paper revealed a beautiful positive image! (Okay, the photos aren't exactly sequential, but you get the idea.) I encouraged him to keep the prints to one end of the paper, so we could turn them into note cards, but that only happened with intensive guidance.

That laundry mountain in the background? We're ignoring that. We have priorities. 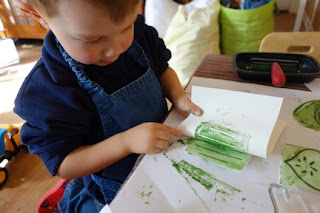 I only showed him the process one time, and he was off to the races on his own. 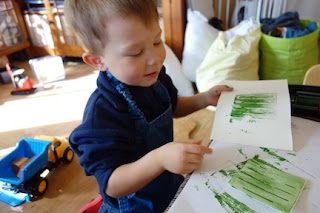 I did make a drawing of a truck on the fly, and when he discovered that new images could be made on the fly, he started to demand more trucks, wanting to make only one print of each one. For your first attempt at this, it might be a good idea to pre-make the printing "blocks" and keep it at that, unless you have all day to spend!

This project was lots of fun, and really satisfying. I enjoyed it, too! If you have older kids, this would be a great idea for a Valentine's Card-Making after-school gathering.
Posted by bug at 10:30 AM