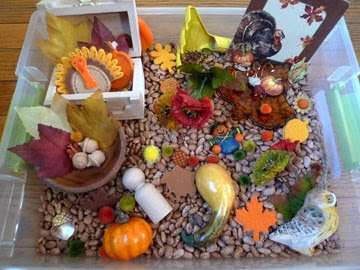 After watching and thinking for a year, I finally pulled together a sensory bin for Starboy. He loves his rice box like crazy; it's just a plastic container with rice and a few cups and scoops. He runs his trucks and trains through it and can spend literally hours playing.
I have mixed feelings about the bins. When I first saw them on Counting Coconuts, they looked like incredible fun—but also overstimulating. And all of the plastic...crap! We've been trying to keep things natural for Starboy so he can appreciate natural, earthy materials before mainstream kindergarten hits him with an onslaught of made-in-China Disney Cars, Hot Wheels, and a bevy of multicolored stimulation. So I held off. Our rice bin is monochromatic, and the materials of the tools are wood, steel and glass for the most part.
But I still wanted to try—it just seemed so fun! I decided a perfect time was while my friend the Thumbstumbler* was moving, and needed a hand watching her little one, Mary Jane.* You know, one of those times when you just need your child to be safely engaged so you can get stuff done. And when everything comes 5-10 to a package, it's going to cost the same to make two bins as one [note: if you are starting these from scratch, and you don't homeschool with a use for the extra stuff, go in on the expense with 2-3 other mamas!]. The thought of buying all of this stuff (and storing it) every month has seemed a little overwhelming, so I chose a Harvest theme to cover both Halloween and Thanksgiving. It's a direct rip-off from Counting Coconuts. Well, the idea, anyway. I bought what I could find at Micheal's and the 99c Only Store; a few things are the same and a few aren't.
I realized after I opened everything up that maybe I'd over-bought; I think the bin could stand to have a few less items in it. Ah, well.
What's in the bin:
—pinto beans (a big bag easily makes 3-4 bins)
—glass Autumn leaf dish
—small wooden bowls
—tiny garden rake ($.30 on discount!)
—Fall leaf felt stickers (stuck back-to-back so they won't be peeled and stuck somewhere)
—turkey felt stickers
—foamy owl (back-to-back)
—foamy pumpkins, some glitter (back-to-back)
—silk fall leaves from the 99c
—felt pumpkin stickers (back-to-back)
—Autumn color pom-pons and glitter puffs
—small, sort of paper-maîché pumpkins and gourds
—Harvest scrapbooking buttons (scarecrow, Indian corn, pumpkins)
—wooden beads
—wooden acorns
—small treasure chest
—owl Christmas ornament from Cost Plus World Market
—wooden peg person
—chipboard photos of corn, pears, flowers and autumny things
—the box itself is from Target. Starboy can open it by himself.
Later I will add some Colonial Settlers and Native Americans Toobs, for a Thanksgiving theme, after Halloween.
The entire time in Michael's, Starboy was hot for a small package of transportation buttons ("teeny tiny cars!"), but I wanted to start with some seasonal bins. He's big on the teeny tiny cars these days, especially since I have some Squinkies that we use just for restaurant play. I know, gross, right? Talk about overpriced plastic Chinese crap that is NOT natural. But they are small and high interest, which makes for a pleasant meal out. Rationalization? Conspicuous consumerism? Hey, at least it's open-ended play.
*To help with privacy, everyone on the blog gets a nickname.
Posted by bug at 8:36 PM