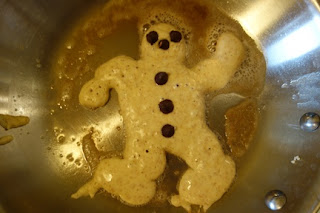 We've been reading Little House in the Big Woods by Laura Ingalls Wilder. This morning, Starboy heard about how Laura and Mary celebrated Christmas with their cousins. Ma made "pancake men" for each of the children. The book described how deftly she created them, and how crispy delicious they were.

He insisted on having some. Mostly because, when I looked at the two remaining eggs yesterday, I thought, "We won't be needing two eggs tomorrow," and I hard-boiled one of them, along with his fresh egg from school, so we had one egg for a two-egg recipe, and all the neighbors asleep. Isn't that always the way? So I made only half a recipe of mix, which added up to five pancakes. 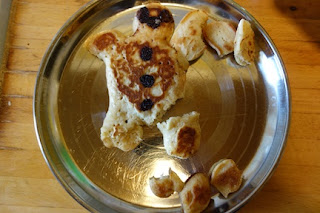 But crispy and tasty: we have that covered.

Starboy is enthralled with the "Laura and Mary books." They have wonderful picture books based on the series, with text mostly from the original, and illustrations in Garth Williams' style. Interestingly, we got two books based on Farmer Boy, about Laura's husband Alamanzo as a boy, and Starboy isn't interested. He knows they are supposed to be "Laura and Mary books," and he doesn't know who that boy is.

We've borrowed everything from the library, which also has been great. 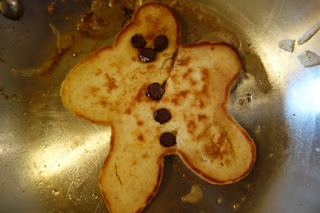 Shooting for a lower bar, with smaller arms and legs (and two spatulas) offered greater success. He's like a starbaby pancake man. 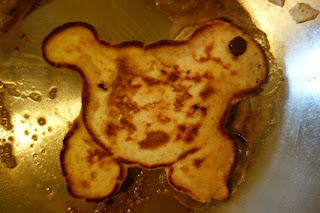 Pancake doggie! Techman woke up just in time to eat this one while it was hot. 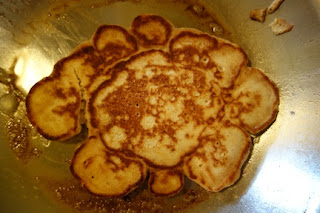 Pancake doggie that went wrong that was turned in to a flower that....went wrong. Then it went right—into mommy's belly. Yum! After this, I gave up on shapes, and split the last, oval sad pancake with Techman.
Posted by bug at 9:43 AM