My neighbor sent me an email with a "magical" project: Fairies in a Jar!

The photo, despite being clearly PhotoShopped, leads you to believe that you can create sheer magic in your own home, just by cutting up a glow stick and shaking it into a jar with glitter.

So I do. Did you know that glow sticks have little glass tubes inside? That's what makes the clicky sound when you break them. So I cut the glow stick, then had to figure out what to do with this thin glass tube of liquid. I ended up breaking it up with some pliers and leaving the pieces inside. And I dumped in some glitter, two kinds. 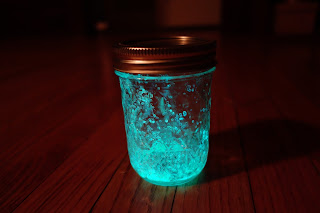 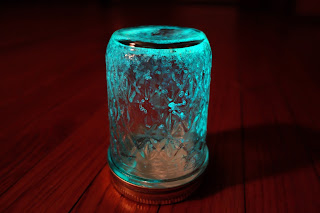 ...be-glop? The jar glowed....but there was no sparkling effect. You couldn't see the glitter.
Techman walked into the kitchen and was momentarily impressed because he thought I had made a DIY glowstick with household chemicals.

Hey, I have super powers.

I shook the jar around. I looked at it in the dark. Techman said, "You know what that is?" 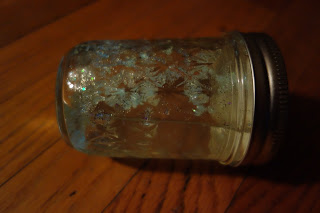 Maybe it needs water, like a snow globe? Bad idea. It killed the glow, and all the glow goo globbed together (say that 10 times fast) and floated on top. It went dark within a couple of minutes.

So, if you want to make a jarful of creamed fairies, give it a shot. Might be great in a friendly haunted house at Halloween!
Posted by bug at 9:44 PM