Starboy and I went to Lowe's to scout out Fairy Garden gear. I chose Lowe's to check out this 18" "wine barrel" for $10. Which, of course, they didn't have. 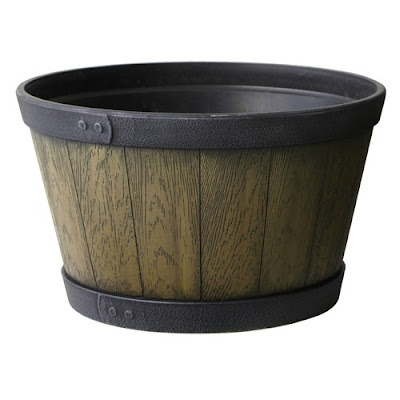 But now that I look at it closely in the photo, it probably was plastic and I wouldn't have wanted it....but it's about as inexpensive as you can get to buy a new, decently-sized garden container for your fairyland.

By the way, my experience at Lowe's in Burbank wasn't all that positive. I spoke with at least three different sales people and not one of them seemed familiar with their stock, interested in finding out more information for me, or helpful in pretty much any way. In single days I would have just bailed and gone back to Home Depot, but we already were Beyond Nap with Starboy so I decided to figure it out on my own. 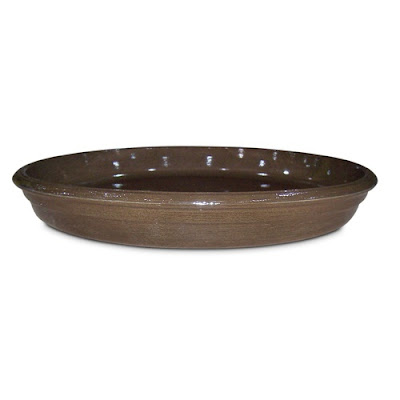 I also wanted to see these saucers for $13. They were as expected. Very roomy, sturdy, pretty. This possibly would be a good way to go for a garden, especially with a lot of kids putting one together at once, though I would advise caution because it would need a lot of watering and attention to stay alive since there would be hardly any soil. And there's no drainage, so the whole thing could mildew. 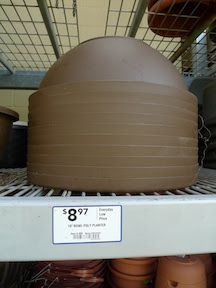 Overall, the best deal seemed to be these planters, even though they are plastic. Nine bucks and 18" across. They don't use a lot of soil. If you weren't sure you wanted to commit to a permanent garden, or you wanted to sponsor gardens for the whole birthday party, this might be the way to go. 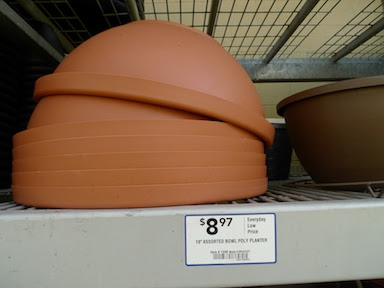 It also comes in terra cotta color. Still plastic. You might have to drill some drainage holes. 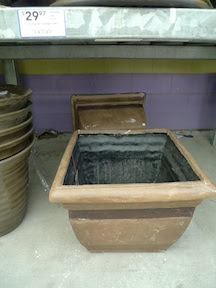 This looked like a good option; it's lightweight (plastic) but doesn't look too bad. But I didn't really want to spend $30 for a plastic planter. 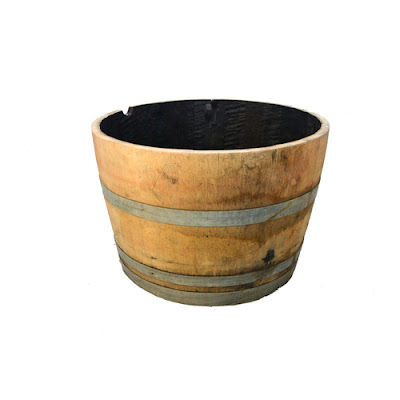 So instead I spent $30 on an old wine cask. Which I know is going to make a good garden, because that's what Donni's family used several years ago at The Magic Onions. 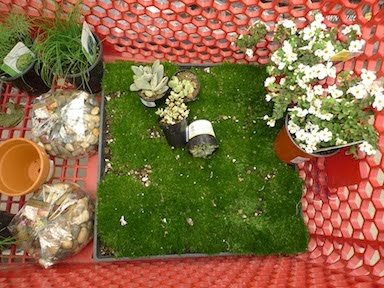 And the fillin's:
• One flat of moss $3 (I would have gotten two, but they only had one.).
• Tiny succulents, $2 each
• Terra cotta pot for a fairy cave, about $2
• Flowery plants that I hope will cascade down the side of the barrel, about $4 each
• Some chives that I might include...though I feel like either all of the plants should be edible, or none of them, so children can't get confused.
• Fancy river rocks for paths and making a well and a pond. Five bucks per bag! Geez! If you live near a lake, spend a day collecting!
• And soil! I nearly forgot to mention I picked up two bags of organic soil to fill the bucket. *

The next step is to sand the edges of the wine barrel, which are rough and splintery. But first, I have to figure out how to get it out of the back of my car. And all of that is on hold until they finish the street resurfacing today, since we can't even get into the driveway.
Posted by bug at 8:33 AM