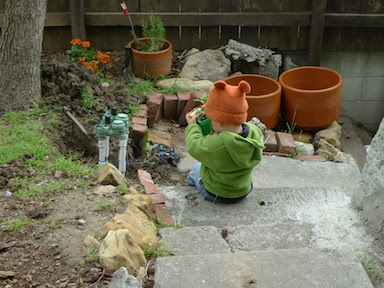 Starboy takes ownership of the red pepper plant. Techman finished fixing the sprinkler system this weekend, too.
It seemed time to finally plant some organic veggies and herbs in a small garden. They used to call these Victory Gardens, but since I kill nearly everything I plant, I didn't want to cheer prematurely. I think this garden will be more of a "draw."
Techman and I have been talking about building a raised bed for the back yard in the single sunny spot we have (not complaining; the shade is great in the summer and fall), but there is a lot of work to do back there, and neither of us have gotten around to making a plan or finding the location, so I decided just to press forward and use terra cotta containers in a sunny sliver of front yard. 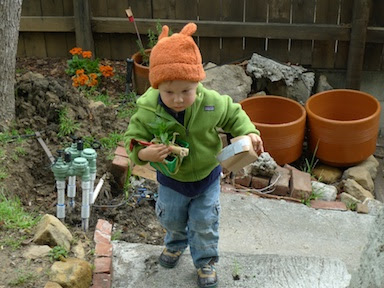 A catalyst to all of this was winning a prize at a baby shower last week for being able to name 20 out of 24 baby names for animals. (A kangaroo baby is a joey. A baby eagle is an eaglet. A baby bear is a cub. And so forth.) It was a Cliff Claven moment, rewarded with a a little rake, a small red pepper plant, carrot seeds and cucumber seeds.
None of which had occurred to me to plant before. 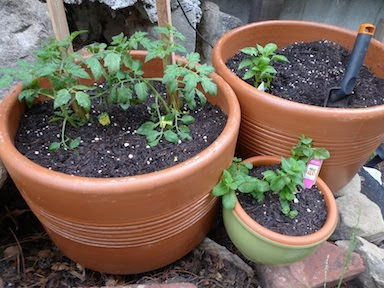 So I picked up some planters, some herbs to replace the ones I killed from the farmer's market last August, and two "very sweet!" tomato plants. The cucumber seeds went into the right-hand pot with the pepper. Which seems ridiculous. Don't cucumbers need more space? Apparently I like trying things the hard way. I really wanted to try zucchini, but there was a small voice of reason in my head pulling hard on the reins. 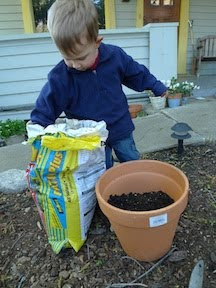 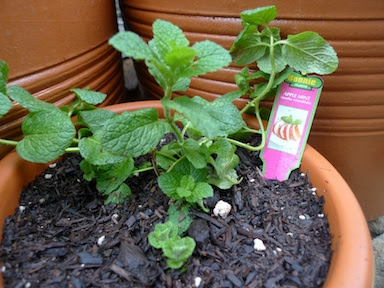 The apple mint is for Starboy. I happen to know that mint and chives are fairly unkillable. But I don't really like chives.
Come to think of it, I don't like mint, either. But it's fun in the yard. 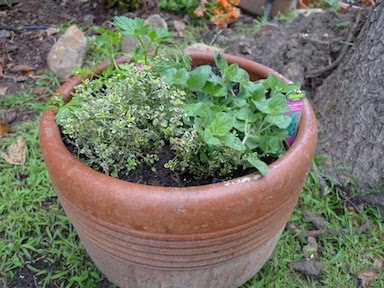 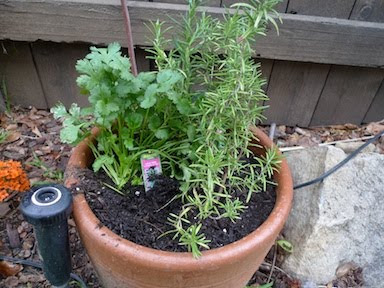 Cilantro, rosemary, and maybe room for one more. I have no idea if that sprinkler head works. 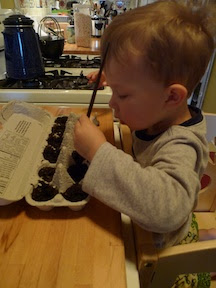 We also planted basil seeds to sprout indoors, and the carrots went in a pot all their own, as well as a whole pot full of kale.
Are you supposed to sprout basil indoors? I feel like everything I know about gardening is like a memory of a dream from preschool projects. I am very afraid of the Internet on this one. I don't need another hobby to get all detail-oriented about. I just want to know that I always have cilantro and basil without paying three bucks at the store.
Starboy has been a little under the weather this week, so aside from the attachment to the red pepper plant (and let me be clear: He wouldn't touch a red pepper on his plate at any meal with a 3-foot fork and a pair of gloves on), and a few minutes with the soil and the spade, he was a little out-of-it. I'm hoping this week he'll feel a little better. I know he's going to like the watering. Let's hope he will like weeding, too.
Posted by bug at 10:43 PM