Here are some articles I found interesting this week. I'm a little behind in my RSS queues, but hopefully I'll catch up sometime, um,  this summer?

Paranoid Parents Are a Bigger Threat to Kids, by James Peron in the Huffington Post
Even though statistically kids are much safer today, parents are terrified to allow them the independence they need to grow into sensible adults. If you're interested, there's an entire blog on this topic at Free Range Kids. You'll see more on the topic here, as time goes on.

Tending the Body's Microbial Garden, by Carl Zimmer in the New York Times
We are just beginning to understand the benefits of good bacteria in the body, the article says, and notes that vaginal birth offers a share of these bacteria to the baby that aids in breastfeeding and immune system function. Another vote against the horrifying 32% Cesarian rate that we've allowed nationally.

Dirtying Up Our Diets, by Jeff D. Leach in the New York Times
More on the topic of microorganisms that aid in immunity (e.g. allergies, autoimmune diseases). Basically, our lives and food are too "clean." More notes on how the trend in Cesarian births contributes to the loss of microbiota from one generation to the next. 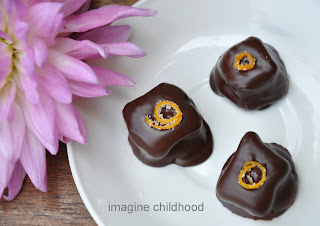 Okay, this isn't a standard article, but my word: A recipe for Bon Bon S'mores, which are mini s'mores made from homemade graham crackers and homemade marshmallows (both from Smitten Kitchen), then dipped in chocolate and topped with candied orange peel. These things wouldn't stand a chance in the heat of Joshua Tree, where we camp, but they seem more appropriate for a black tie affair, anyway. Curse you, boot camp! Curse you!
Posted by bug at 8:10 AM