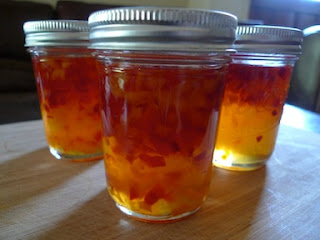 Since we're having record heat this week, I thought: What a great time to coop up in the kitchen with one window and no ventilation, to make jelly out of gassy peppers that the police use for crowd control! 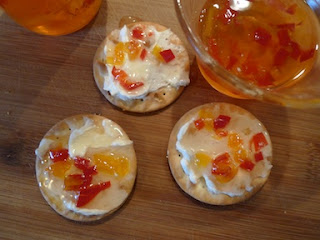 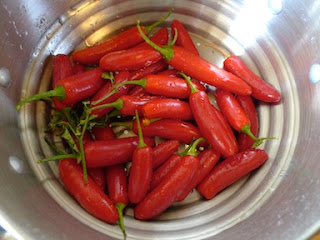 My brother was out of town this week and when I picked up his mail, I noticed his pepper bush was going nuts with fruit. I grabbed a bunch. What kind of peppers are these? No idea. They're like, red jalapeños. Hot. Even Techman says they are spicy, which means they are hot.

I Googled recipes and came up with a bunch that seemed fine. All contained pectin, so that tells me peppers don't have any naturally. All had a LOT of sugar, about a cup of vinegar, and covered two schools of technique: dice or mince the fruit, or pulverize it in the blender. Most did not include the seeds, though some recipes included some seeds.

I decided to springboard off a recipe that included sweet peppers as well. I later found one that instead uses apples and cranberries, and their natural pectin—I definitely want to try that one for Christmas gifts some time.

So, I created my own recipe (at bottom). It came out great, though the jelly doesn't seem to be setting right away, like other jams I've made. Does jelly really take overnight to set? It's possible that this isn't jelly at all, just a great sauce for chicken and fish. Well. I can roll with that. 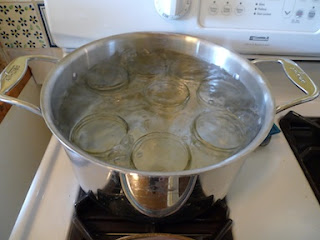 First, you want to boil your jars for 10 minutes to sterilize them. Wash and dry your new lids. Do not touch the insides or the lips of the sterile jars or lids—this could result in an unsafe canning issue later. Set the lids aside under a linen towel, and allow the jars to stay in the hot water. The jars should be covered by 1" of water—a proper canning pot should allow this. 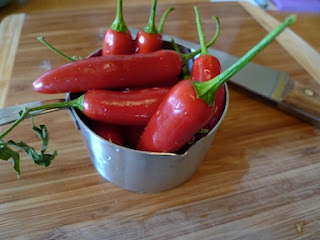 I thought I would start with a cup of hot peppers, as many recipes advise. That would have been 13. But then it didn't seem like enough, and I had a lot left, so....ultimately I used 20 peppers, seeded and minced. Wear gloves, and for Pete's sake, don't touch your eyes. Then I added four sweet bell peppers, seeded and minced. But while things were cooking, the mixture looked so watery, that I added another pepper. So, five altogether. 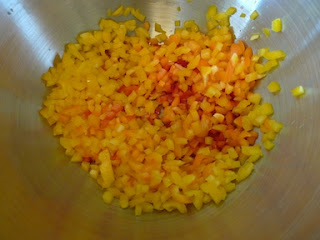 I stirred them all together in a bowl, but you could probably do it right in the pan. 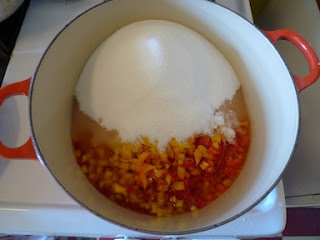 Most recipes called for seven to 12 (!) cups of white sugar. I used six cups, which was plenty. I would recommend organic sugar in the raw if you can afford it, though I just used white grocery store sugar.

After the fruit is cooked, add 1 packet of liquid Certo pectin, and 3/4 cup fresh lemon juice (two backyard lemons). The pectin is what makes it jell, and the lemon juice should add a bright flavor and color. Boil for ONE minute more. 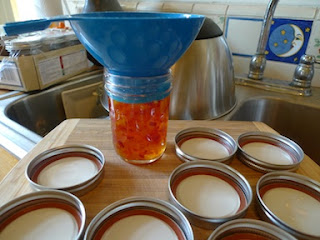 Fill the jars using a funnel. These funnels are great, they keep the lip of the jar clean and they give you a fill point so that you fill the jar to just the right level. The metal ones probably are easier to keep clean. 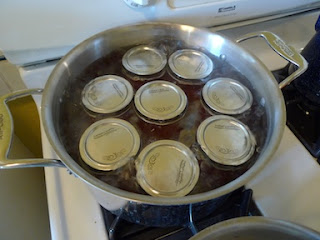 Place the lids on and screw tightly, but not crazy tight. Process in a rolling boil for 10 minutes. The jars should be covered with about an inch of water (mine weren't. I think I gave that pot away.).

Remove the jars from the bath using canning tongs and allow to cool. You'll hear popping and clicking sounds, indicating good seals on the jars. Check the seals. If the lid is not sucked into the jar and secure after a few minutes, then you may have to re-process. 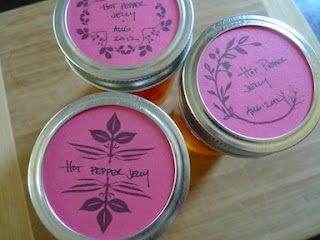 When the jars have cooled, slide the rings off and place your labels. I used these gorgeous printables from Soule Mama's new Taproot magazine. I chose red tagboard since the jelly is "hot." 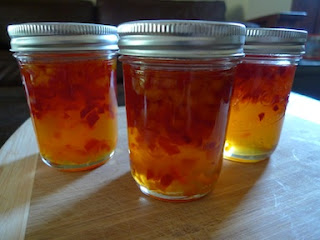 Beautiful, no? I think I may have overcooked it. Or under cooked it? If you get the right jell, the peppers are distributed throughout, not floating at the top. One person online said she dumped all the jam back in the pot to boil for 12 more minutes, and re-sterilized all her jars when hers turned out like this. 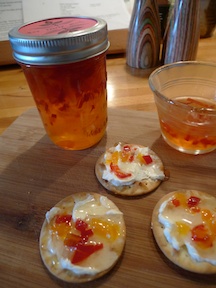 I saved a bit out to taste, with cream cheese on a cracker. It was sweet and super runny and sticky. Not a home run, but it sure was tasty! And hardly hot at all. I wonder how spicy it will get as it sets?

Making the jelly:
First boil your jars, and wash and dry your lids. Leave the jars in the water.

Locate the tongs and the canning funnel so you don't have a freakout when the jelly is finished.  I use my grandmother's blue 1960s Joy of Cooking as a resource for this type of thing.

Open a window and turn a fan on pointing outward to suck the heat and pepper fumes outside. Consider using your noisy oven vent as the peppers are cooking.

Let sit 12 hours undisturbed so jelly will set. Will last one year, but best eaten in the first few months.

Enjoy as a topping for chicken, fish, or a bar of cream cheese (with crackers) the next time someone drops in unannounced.