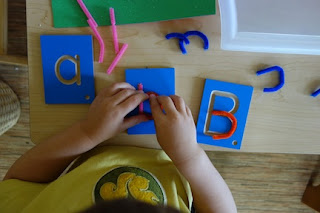 Starboy is still letter crazy, even though he guesses that nearly all of them sound like /n/. I hope the madness lasts, we've got a long way to go.

I'd given him a paperclip to use as a tool for poking extraneous pieces out of foam stickers, and he bent it into a W, an M, an E. When he saw all the possibilities and wanted more paperclips to make other letters (while he threatened to scratch up my antique desk with the W), I pulled out the pipe cleaners. 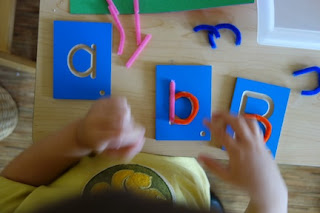 I cut them into straight and curved lengths that would fit into the grooves of the Montessori letter tiles. Big hit! The added bonus is he has to focus on differentiating between the lengths of each piece, which vary from capital to small (and vary by letter, e.g. the crossbar in A).

The trimmed pipe cleaner pieces are currently being stored in a half-egg-carton, so he can sort as he uses them as well. Unfortunately I don't have Montessori "shelves," as there isn't really space for them.

I also don't have a strategy for attacking all of the letters. It's clear he's still trying to understand the differences between the "name" of the letter and the "sound" of it, between capital and small, and between cursive and print. I'd prefer to focus only on cursive, but there is very little supportive cursive script to offer additional teaching in our computerized world. So the approach so far has been haphazard. I'm surprised he's able to remember any of it.

I'm going to have to do some research to offer a proper strategy.
Posted by bug at 8:29 AM

bug
I'd love to hear from you! eggjuicewithpep [a] hotmail.com