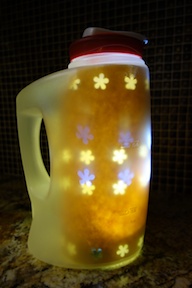 Towards the end of our vacation week, we tried for an all-family night out at a restaurant, but Starboy had hit the wall. He was into his third or fourth nearly-full-meltdown when we pulled the plug, as soon as we got to the restaurant, and took him back home (and had sandwiches for dinner instead). He was really disappointed that his missed out on a night out, and said that a Lantern Walk in the dark with Daddy would be nice. 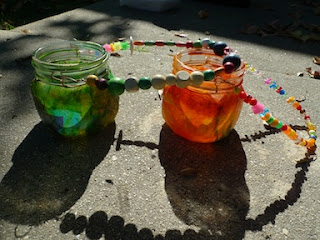 We didn't have any of our Waldorf-style lanterns with us (glass decoupaged with tissue paper, and beaded wire handles), but we did have some construction paper and Spring paper punches. And a plastic tea pitcher. 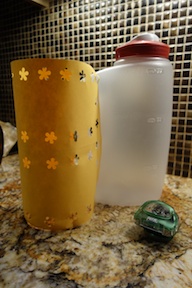 So I punched a few holes in the paper and stuffed it into the pitcher with a headlamp. It was surprisingly cool for a spur-of-the-moment solution, and it was great that Starboy could carry it vertically or horizontally.  It's too bad he was so cooked, or I would have had him do the punching as a project. But it was too late in the evening, as it was. 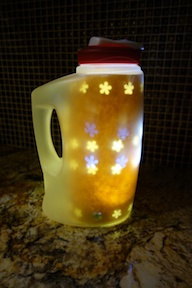 I was glad he could have some special time outdoors, even though he was too tired for the full-family late night.