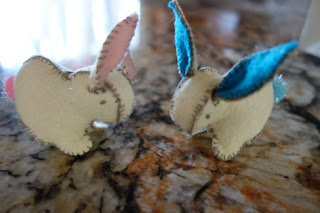 We spent the week on a family vacation in the desert with Techman's family, at a gorgeous midcentury home with a pool. The cousins had a ball swimming, and Starboy loved playing and reading with them.

I try to keep Easter fairly simple for Starboy, especially since we're not religious. Although. I'm not good at simple, really, despite my lip-flapping about it here. I always add one more thing, then one more thing...then...just one..more..thing....and an Easter egg hunt!

These felt bunnies were great fun to make. They are the same ones that The Optimist got in her surprise egg last week. Best thing in his basket. Of course, he ignored them. Now that he knows about chocolate. 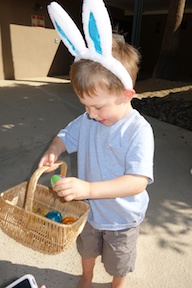 Starboy did like a little airplane charm on a necklace chain, and two tiny rubber animals (a bunny and a polar bear)...and the M&Ms. All hidden in the plastic eggs. He seemed to have a great time at the hunt with his cousins. Their family doesn't do the Santa/Easter Bunny myths; Mom didn't want to bother with it and the kids have known it was their parents all along. Techman's sister had suggested that she was the Easter Bunny's "helper," in hiding the eggs. There was so much talk about that, and none of it too veiled, that I'm pretty sure Starboy thinks that she gave him all of his treasures. 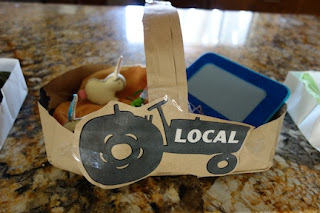 Since his real basket was used for the hunt, I cut up a grocery bag for his Easter Bunny basket. Ick. But a fine solution for vacation. 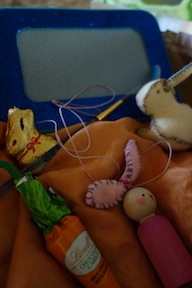 Starboy's basket included a fancy chocolate bunny and carrot, the peg bunny he asked me to make, and a faux Buddha board made with calligraphy paper and a frame from the dollar store. (This is a cheap way to do it, but it's not the best—the paper started falling out of the frame the first day.)

Last year's booty is pictured here. For his first easter, he got some wooden bunnies from MamaRoots on Etsy, some Earthentree egg rattles, an Automoblox car and a small, stuffed Gund bunny who now stars in every reading of "The Velveteen Rabbit." The simple toys really do seem a lot more rewarding than the day-Glow packets of Reese's eggs and Pez, which I've been seeing all over my friends' Facebook posts. 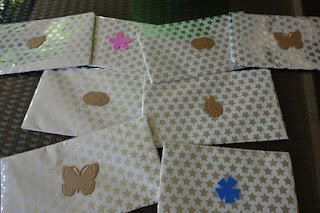 The egg hunt also featured stickers, maze books and MadLibs, which were too big to hide. So eggs contained a child's name on a shape, which he could match to his prizes.

We tried a new thing this year: hiding puzzle pieces inside the eggs, for a puzzle of a hamster the kids could work on together. You know: work together for a common goal, a real scene from The Waltons. 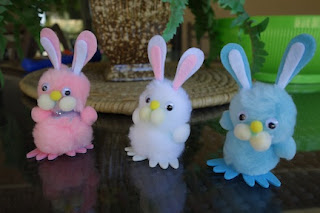 This goofy craft project from Michael's was a surprise hit. It was fiddly, with a lot of gluing, but all three kids (aged 3-9) seemed to enjoy it.

Boy, was that a disaster. First, the kids didn't have much interest in a puzzle with all of the other bounty. Then, Grandma and Grandpa wanted to get started on the puzzle, but they didn't have all the pieces because the kids hadn't finished sorting their loot and checking everything out, yet. Somehow, one of the puzzle pieces went missing. And to top it all off, the puzzle was really hard. It was a bummer, because I'd also wanted to get this great puzzle of meerkats, which Starboy has a thing for these days, but I was trying to include the cousins and find something everyone would enjoy working on. So I'd chosen the off-brand guinea pig puzzle instead of the "Cadillac" Ravensburger of meerkats.

There was so much complaining about how hard the guinea pig puzzle was, and how it was not a Ravensburger, and how it took so long, and the kids had all the pieces—that I abandoned the damn thing at the rental house. And, we won't be hiding puzzle pieces in the eggs again. Easter fail.

The kids hardly seemed to notice, however, while on their sugar high. 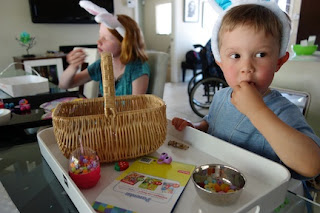 Discovering jelly beans. He ate his entire collection of candy loot in the span of about 15 minutes.