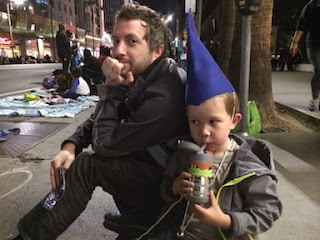 Somehow Starboy knew that today's advent calendar picture was going to be hot chocolate. Either he remembered from last year, or he peeked, since the doors won't stay shut any more.

So we had to bring some to the Hollywood Christmas Parade. Which turned out to be a dicey proposition—they advertised a 5:00pm start, so even though this was pushing the 6:30 bedtime window, I wanted to give it a shot. But it didn't even start until 6:30! The late night didn't set us up well for the week, but it still was a fun parade with a local, Hollywood flair. 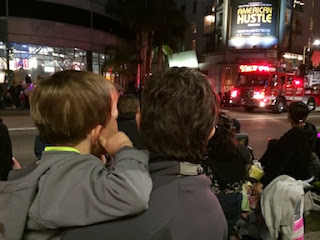 Starboy thought the vintage fire engines were fun, but loud. He also enjoyed the display of movie cars (Back to the Future 1 & 2, Ghostbusters, Herbie the Love Bug and more), even though he has no idea what any of those are.

There were lots of actors, the author of Elf on the Shelf (I know—really), and the grand marshall was astronaut Buzz Aldrin! Starboy was excited to see a real astronaut, but the photo didn't turn out. 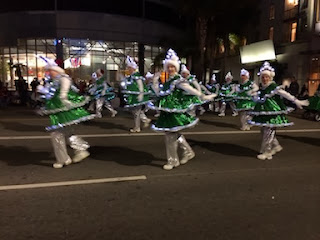 We watched from the front of the Cineramadome, which was an additional Hollywood flair. They were selling their trademark caramel corn, but I resisted! 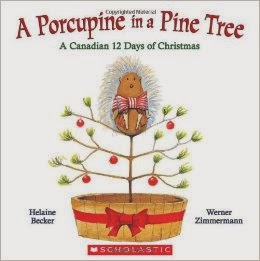 Today's book: "A Porcupine in a Pine Tree," by Helaine Becker and Werner Zimmerman. A Canadian version of the 12 days of Christmas. Very cute. Though completely lost on our SoCal boy.