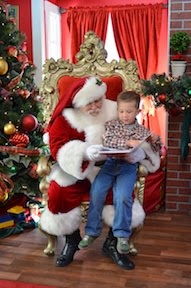 Today was the day. Starboy previously had said that he was just going to say hello to Santa, and not tell him what he wanted. This made me a little nervous. A test?

He gave Santa a wood reindeer ornament, with his name written backwards. He explained: "It's backwards because it's on the back." Santa totally didn't get it. Techman and I both think it's hilarious. I said, "Just hold it up to the light and it will read right." (Which of course was just funny, because the ornament is wood.)

Santa didn't get that either. He probably thinks our family is crazy.

Especially since I snuck in and asked him to explain to Starboy that he couldn't bring a pet meerkat on Christmas, because a meerkat wouldn't be happy without all of his friends, and anyway he needs to live in a burrow and we don't have one. I overheard Santa chiding, "You can't have a meerkat as a pet! It's a wild animal! It will bite you! You don't want that!"

Jesus. Starboy laughed and said, "Not a pet meerkat. A pet wouldn't bite you!" And they proceeded to have an argument about it for a few minutes.

It's a good thing I have a few things set aside for Starboy's stocking this year, because it should cover up those lumps of coal Santa might be slipping in there. 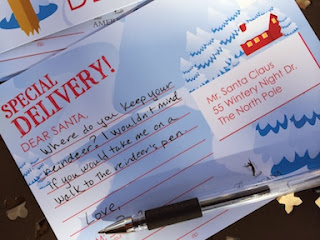 In spite of all of this, and in spite of the fact that some kids at the festival on Saturday told Starboy that the Santa there "wasn't the real Santa," (Really?!? I'd hoped for one more year.) he still wanted to write a letter, and post it in his private box. 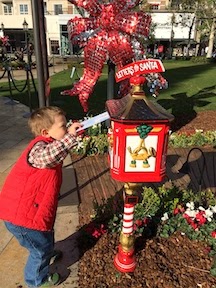 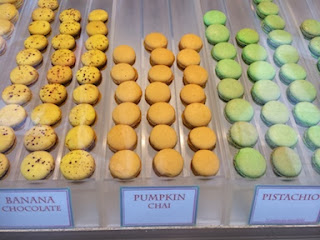 And then we had macarons. Because it's Los Angeles, and we can. 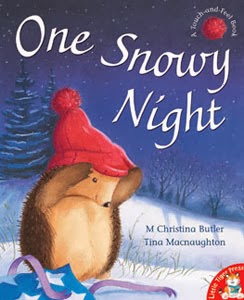 "Santa's Snow Cat" would have been a good choice, but since we'd already read it, I chose "One Snowy Night" by M. Christina Butler because it's a cute story, it's short, and I was running late on bedtime.

I guess this year isn't going to be organized after all.