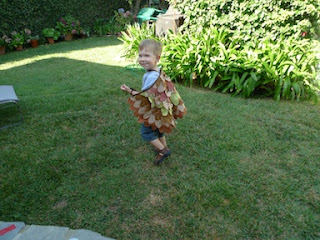 Starboy has Owl as his totem. The owl chose him—one came to visit the day he was born, and hooted outside his window for days. He comes back to visit periodically. Owl represents very powerful medicine, and we feel lucky that it was Owl who chose Starboy. 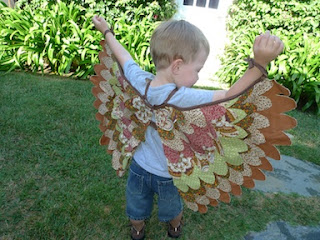 A friend and neighbor dressed her infant son as an owl for Halloween last year, and made a gorgeous costume of colored wings, attached to a sweatsuit. It was genius. After searching the blogosphere, I found a great wings pattern here, though I may also have gotten the idea from Cakies. 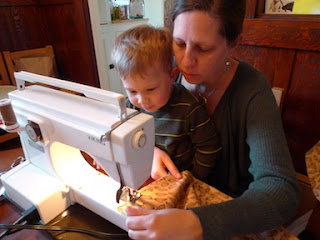 Mother's Day 2012
It took me a long time to carve out the crafting time, and, alas, the photos from my original cutting and first session were lost in a horrible data fire last March. (Note: Back up your hard drive! Regularly!) I'd hoped to offer a better step-by-step here. So you'll have to follow the tutorial linked above. 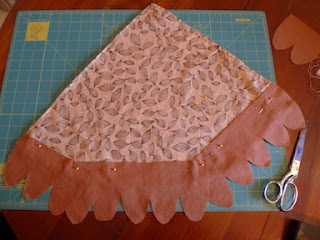 I doubled my fabric to make the wings more substantial, but I wouldn't recommend doing this. It makes them heavy, especially for a little one, and less desirable to play with. 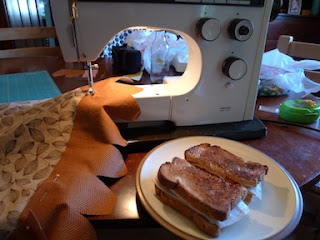 Crafting is better when your husband gives you toasted turkey sandwich breaks. Happy Mother's Day to me! 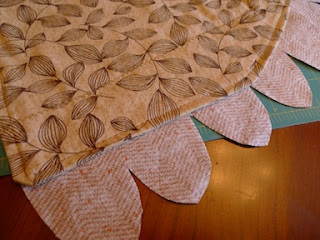 One change I made to the original pattern was to allow the bottom row of feathers to hang down below the hem of the backing. But that puts the wrong side in view. So I sewed on another row behind it such that the bottom row is double-sided. On later wings, I made them double-sided before sewing them to the backing. 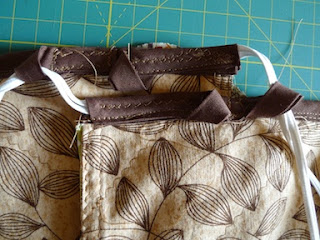 I didn't like the idea of tying the wings around the neck. It didn't strike me as being particularly comfortable, or safe. So I made some adjustable elastic wings, and in another set, I used more bias tape to criss-cross across the chest and tie at the back. Those were a bit more successful, as they ride a bit higher on the back. 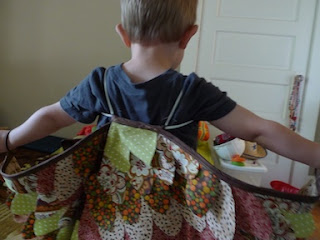 I used elastic hair bands for the wrists, but Starboy doesn't care for having things wrapped around his wrist. This makes him basically uninterested in the wings altogether. Awesome! I probably have chunks of three days' worth of work put into them. 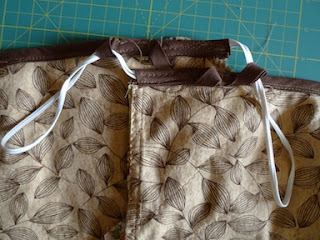 I sized the wings to overlap now, so he can wear them for several years.

These are the criss-cross wings. They tie at the wrist. I used six half-yards of fabric to make feathers for two wings, though with the uneven way they cut it at the craft store, I barely made it. I used another yard (or maybe it was less) to create the backing shape. These would be beautiful with scraps, but I bought new. 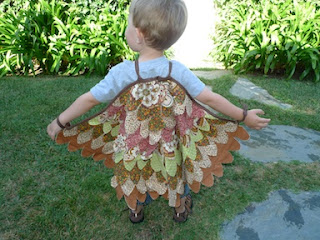 The wings are really beautiful and he did spend some time zooming around the back yard as a bat. Daddy got to be a bat, too, but the wings didn't fit him so well. 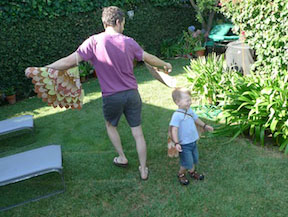