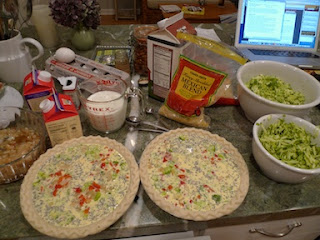 I thought I'd make a few quiches for our upcoming party. I have access to an oven with a working thermostat (revelation!) and I can pop these in the freezer until the day before party time. 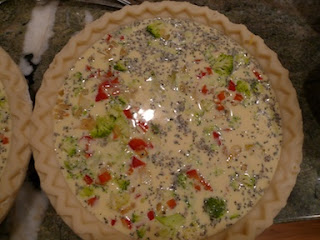 They are cheese, broccoli, onion and red pepper quiches. With store-bought crust. Which turned out mushy, unfortunately. But a funny thing happened..... 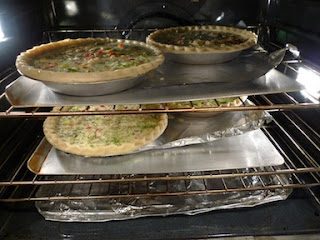 In my effort to double the recipe to come up with four quiches—some for dinner this week and some for guests—I ended up with...well...eight. It turns out that I got all the stuff to double a recipe that makes two quiches, and...I didn't really realize it until I was up to my neck in it.

At that moment, I muttered some sort of curse word.

And Techman said: "Is this another Corn Chowder Incident?" I buried my head in my hands, and laughed nervously.

Many years ago now, I set out to make Barefoot Contessa's delicious corn chowder. I doubled the recipe to make sure we had enough for the freezer, for later. As long as you're going to the trouble to cook, might as well get mileage out of your time, right? It wasn't until I needed to dig up a third spaghetti pot that I started to clue in that we were going to have a lot of corn chowder.

Techman came home from work to find nearly every surface covered with soup, soup pots, spoons, and related rubble. I didn't understand how I had so much, compared to the last time I'd made it. Confused, he said something innocent, like, well how much was the original recipe supposed to make?

Well, I dunno, I said stubbornly, it's soup. Probably it's for six or eight.

I looked at the book.

That was something like 2005. I don't think we've had corn chowder since. We're both kind of maxed on it. But I don't fall for that trick in her books any more. 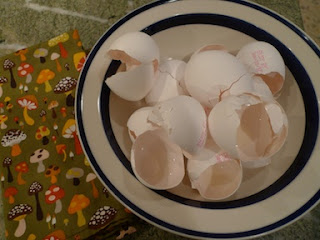 Just in my own recipes. Eight quiches requires a lot of eggs. 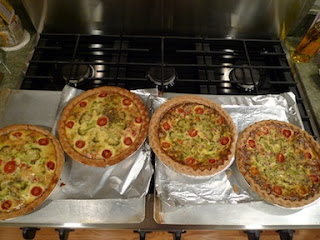 So, it was a late couple of nights and the freezer is full. My aunt is getting some quiche as well, as thanks for letting us stay at her place for so long. And, um, because our freezer is full.
Posted by bug at 1:05 AM