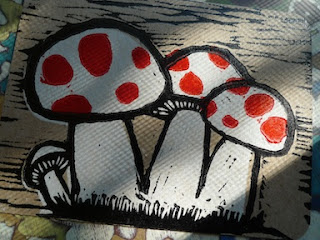 I had a really difficult time choosing invitations for the Fairy Party. Here is my inspiration board on Pinterest. So many choices!

I ended up with these lovely hand-pressed postcards from Philip Gresham on Etsy. I wanted something that would be a bit of a souvenir—something for the nature table, or fridge, or pinboard.

I had dreams of putting them through the printer, but my printer couldn't take it. I ended up handwriting all of the cards. Which was a nice touch, though a little more effort than I'd planned for. 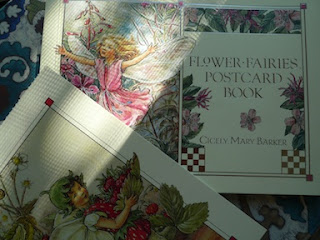 Then, since the party was moved back and Starboy had started school, I needed to make eight more invitations. I decided that including the class would be a great way to get to know each other. I didn't have eight toadstools left, so I used some Cicely Mary Barker flower fairy postcards from Amazon, which I'd intended to use as thank-you notes. No matter. I made a printout of the information and glued it to the back. My home printer would have worked, but at the time we were staying with my in-laws, and I didn't want to mess with their laser printer and an odd-size paper.
Posted by bug at 10:17 AM