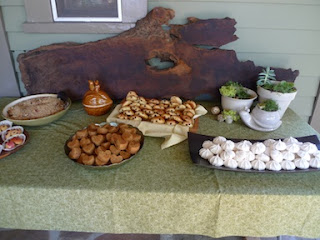 See those big, open spots that would have been perfect for quiche?


I'd hoped to do more with my serving table, but with painters pushing up to the last minute and another freakish heat wave, it was not to be. I'd planned on spending bits of the whole week planning, arranging, setting up...but instead I got the second half of the day before the party (after we attended another great birthday party) and up through the night.

Thank God for Venus, who not only helped with the centerpieces—twice—but also stayed late that Saturday night to help me set everything up and make some key decisions. And she loaned us a table. 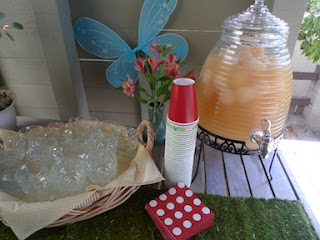 The lemonade was delicious. I hit about seven different thrift stores to collect punch cups, to avoid throwing away a lot of paper cups. We used some paper cups for coffee. A couple of days before the party I froze lemonade into ice cubes so that the melting ice wouldn't dilute the drinks. It worked great, though it was strong enough I'd suggest having at least 1/4 of your ice be regular ice. 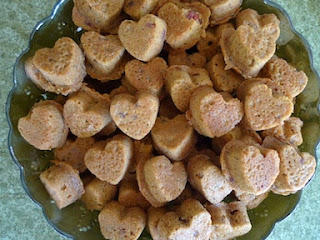 I have a carrot muffin recipe that really is unfrosted cupcakes in disguise. They held up well in the heat and disappeared quickly. Well. Except for the big second container that I forgot to put out. 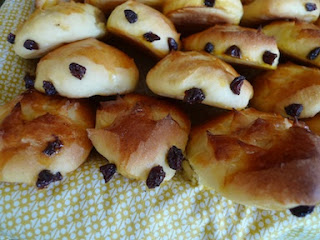 The infamous challah-hogs. Now that I've made them twice, I can safely recommend that you use some other bread recipe for hedgehogs. The challah doesn't stand up. Though the kids loved the flavor. 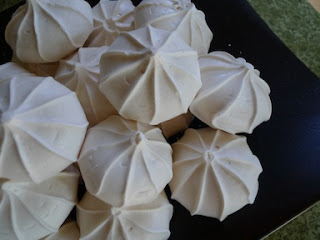 "Cloud cookies" from Trader Joe's. Starboy claimed he ate "one" of these, but Techman thinks the number was more like 21. Except for lemonade, I think this was the only thing he ate all day, which made bedtime really fun. 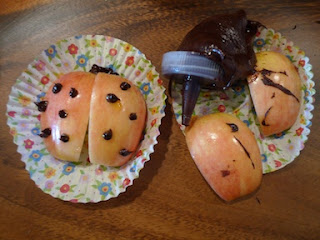 Ladybug apples. I loved this idea, which I saw online. It may have fared better with a pre-test on the chocolate. I melted some dark chocolate in a double boiler with some milk, but as you can see it didn't flow so smoothly through the squeeze bottle. I should have just used frosting. 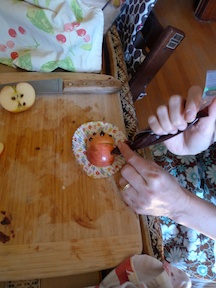 I put the Thumbstumbler to work making ladybug apples. Because she loves crafting so much. Thankfully, she came an hour early to help out, and finished off the apples, which I really wanted on the table. Lifesaver!! 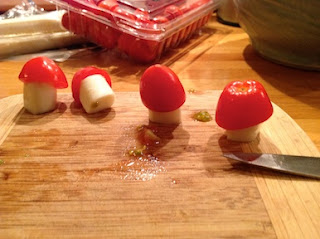 Wouldn't these have looked cute on the table? Yeah. Too much work. And the nice mozzarella sticks I got wouldn't stand up. Bail, bail, bail. I offered the cheese sticks, but at the last minute (around the time I realized I'd forgotten to serve the quiche, after a lot of people had left), and I had to leave them in the cooler lest they sag in the heat. So...suffice it to say that the week following the party was a heavy cheesestick week for Starboy. Ah well, another time.