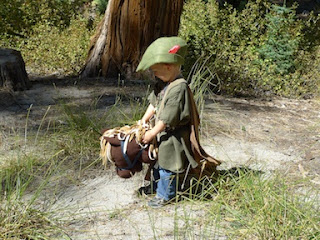 With his fairy adventures behind him, and now attuned to the "themed" blockbuster birthday party, Starboy suited up as a forestman for a Robin Hood themed birthday campout at San Bernardino Forest's Black Mountain Sherwood Forest last weekend.

Thinking that a great costume might be a giant step ahead for Halloween in a few weeks, I decided to go for it and do the whole shebang—hat, tunic, cape, details. Truth be told, I also was inspired by Jim at Sweet Juniper, in my hometown, but he's a tough act to follow.

I haven't sewn from a store-bought pattern since seventh grade home ec. But how hard could it be? I used McCall's 2854. 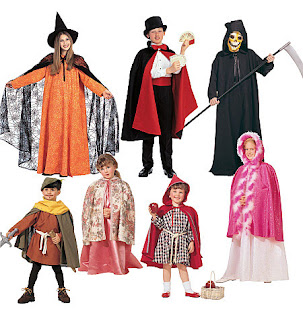 Well, it turns out that if you want it to come together easily, you have to cut the fabric out on the exact lines of the pattern. I know, that would seem obvious. But I didn't want to cut the original pattern down to the smallest size—hey, we're on a Waldorf path, we could need these capes and things again for some sort of Medieval festival at some point—and I was cautioned against using a tracing wheel for fear of leaving holes in the microfiber. So I just sort of eyeballed it. 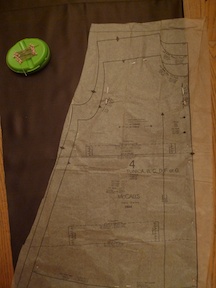 And, um, came up a little short in places. I wasn't really paying attention. It was late. You know how long it takes to get Starboy into bed.

So...I pieced some bits back on. It was fine. Really. It turned out fine. It was like quilting, a little.

"Only two hours sewing time!" the ad on the pattern envelope crowed. Okay, that was total baloney. But maybe if you know how to cut out a pattern, follow directions, and choose fabric that doesn't shred on the edges, you could do it in that amount of time. 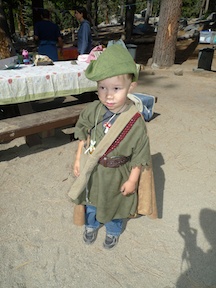 I made a hundred mistakes. And quadrupled the amount of time it should have taken. Added a hood to the cape, then added a lining for the hood. The seaming is questionable. But I'm delighted with the overall effect and how it turned out. And it's actually washable, which came in handy since Starboy crawled in the dirt all weekend.

The belt is a Goodwill find, cut down with a pair of scissors. The corduroy bag is an old Dickies purse from a previous Goodwill trip; I embroidered a felt leaf on it to cover the logo, and am in the process of sewing on more leaves and acorns. The red cross-body belt? Goodwill as well. 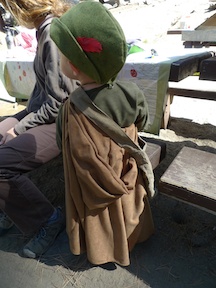 The cape pulled at his neck, so I created a string between the hook-and-eye attachments so he could wear the cape over one shoulder like they do in the movies. I also had added a few inches to the length, which turned out to be not such a great idea with this new fastener system. Ah well, in two months I'm sure it will fit perfectly. The hat pattern was very easy. I couldn't make it look good without doing the lining as well, but the whole thing came together in 20 minutes flat with felt I had already. Techman and I each have a hat as well. You also can get great hats on Etsy. 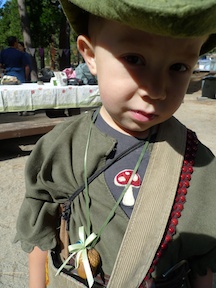 The acorn necklace is from a previous Waldorf faire, and the t-shirt is left over from his birthday. I hope to get some sort of stretch pants to complete the outfit for Halloween, but since last year he came up with his own idea in the eleventh hour (and he's made rumblings about being an owl or a bat), I'm not sure I should be in a rush about it.

A bow an arrow was added later, but more on that tomorrow.


Starboy loved it, and loved the party and dashing around in the wood with the big kids. He wore the costume and hat all day, which was the best compliment of all for mommy.