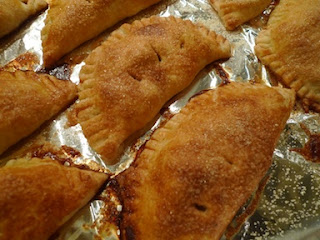 Remember that trip to pick apples in Oak Glen? I decided to convert my grandmother's pie recipe into tasty apple hand pies. It was an experiment; I kind of winged it but they are delicious.

Starboy noticed, "It sparkles!" So we call them Sparkle Pies. This aligns with our new rhythm of listening to the fabulous Sparkle Stories that we download each week and listen to on the way to school.

The big cheat was using pre-prepared crust, though that made it a quick project. 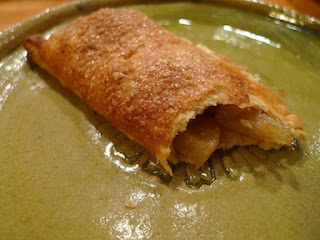 First, thaw—for about an hour—one package of prepared pie crust dough, the kind you have to unfold (not the kind that comes in a foil pie pan). I used Trader Joe's frozen crust, which has a delightful flakiness that tastes probably as good as homemade, unless you're some sort of über-baker.

Preheat the oven to 425˚. Make sure you have plenty of cold milk on hand to accompany the pies.

In a large bowl, mix together:


Set aside about a tablespoon of granulated sugar (or turbinado if you have it) for topping the pies just before baking. Also find some butter that you'll need for the pie filling.


Then prepare the egg wash:
1 egg, beaten with
2 teaspoons milk (or so)
find your pastry brush

Then:
Unfold the pie crust doughs. Set one aside. Cut the dough into four or eight sections, like a pizza. Your box of dough should make 8-17 hand pies, depending on how big you want them. I made four large ones from one half, and nine small ones from the other.

Take one of the sections and make it into a ball. On a floured surface, with a bit of flour on top of the ball, roll it out to about 1/8" thick or a little thicker. You will get about a 5" circle, or a ~7" circle for the larger ones.

Stuff the pies by placing filling on one half of the circle, leaving at least 3/8" from the edge so you can seal the pie. Dot with two very small lumps of butter. If you forget the butter don't worry, you'll live.

Fold the "blank" half of the crust on top of the filling to form a semi-circle, and press the seams together with a fork. Make three small slits in the pie for steam to escape.

Since thin crust will burn, I often trim the edges off before baking. I found that all of these trimmed edges added up to crust for one more pie!

Place the pie on a foil-covered baking sheet. (Sometimes the pie filling leaks out and burns; foil is easier to clean up. A silicone baking sheet likely would work as well, or maybe parchment.)

Repeat until the dough runs out.

Use a pastry brush to paint the egg wash all over the pies. Shake granulated or turbinado sugar all over them to give them sparkle. Now is a good time to check that you've made the steam slits.

Bake for 18-20 minutes at 425˚. After they cool for a few minutes, gently move them to a cooling rack with a flipper or spatula. Note the bottoms are delicate.

These taste best immediately after baking, with a glass of cold milk. Like: You'll hear angels singing. If you re-heat the pies, it can be good to heat them upside-down so the bottoms can toast a little more. 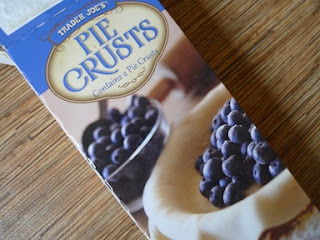