Some Corduroy for Corduroy 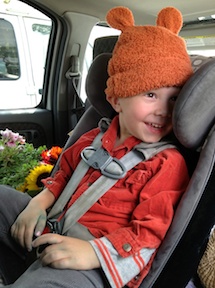 We had a freakishly normal weather day recently, when it threatened to actually behave like Autumn, instead of offering 90˚ temps. I put Starboy in some pants (!) and explained that they were made of corduroy, and that usually we would call them "cords."

A few minutes later he said he needed his corduroy shirt.

How the hell does he remember he has a corduroy shirt? He wore it maybe twice, and that was months ago.

So I got him the corduroy shirt, and he said, "Now I can be Corduroy."

So we got out his bear hat, and I wrote a note for his pocket that said "Corduroy," so he could be like the bear in the story. And he was, all day.

I asked him whether I could be Lisa, so I could say, "There you are, you rascal!"