We're reading a special winter or holiday book through December and also creating a special activity. Today was my favorite day so far. 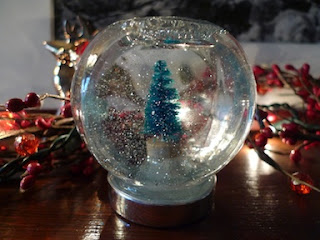 Isn't it magical!?! And a perfect match with today's book:

Stopping by Woods on a Snowy Evening
by Robert Frost, illos by Susan Jeffers 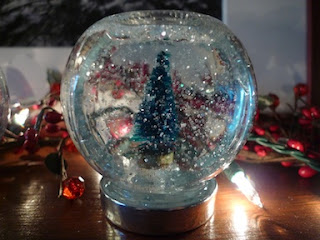 Sigh. This is the most satisfying project ever. And quick! 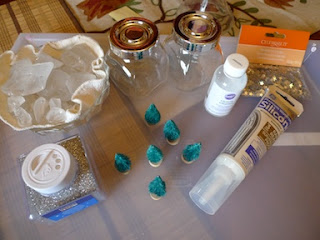 Materials:
• Sea glass (Michaels $3)
• small jars (Ikea, ~$5 for four—these held about 1 cup of liquid)
• glycerine (Michaels, ~$6 for a small bottle from baking section)
• extra fine glitter (Michaels $3)
• tiny star confetti/glitter (Michaels ~$2 in gift wrap section)
• silicone glue
• and small bottle brush trees (Michaels ~$4 for six, in Missions section)
or small plastic animals, such as in a Toob
• glue gun with glue sticks (I like the glitter ones for this project)
• water in a glass measuring cup or something that helps you pour easily. Use distilled water for longevity—it should not change color over time. 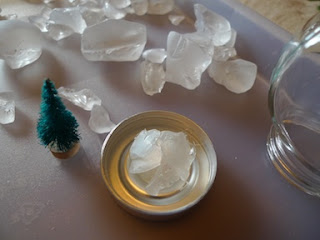 We used the seaglass to create a platform for the trees, so that they could be seen well. We glued them with a hot glue gun and engineered it so it was a little flat on the top.

We did have one "mountain" fail after the whole thing was built. If you have concerns about things being perfect, I'd recommend using silicone waterproof glue instead. But this means you have to wait overnight for it to dry. 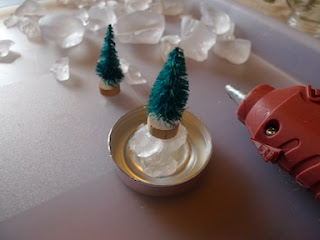 Next we hot-glued the tree to the ice mountain. Starboy does the gluing with supervision—control is difficult for him because the grip is large for his tiny hands.

This tree was not designed to live underwater, so I'm hoping that it doesn't rust too soon. There is a Toob of trees, but we couldn't find one within our timeframe, and those look really plastic-y. Michaels also had a great Christmas scene with various pieces that would have been fun in a snow globe, but I was worried that the paint would soak off. They were 60% off though, so I wish I'd grabbed a piece or two to try. 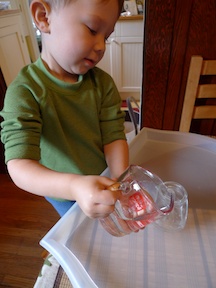 Next, we filled the jars almost to the top with water, leaving space for an air bubble and glycerine. The snow flies better if there is a little air bubble, we discovered after over-filling one of the globes. We added about a tablespoon or less of glycerine, so that tiny jar was plenty for four snow globes. 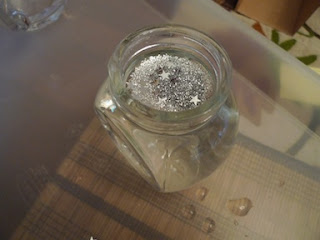 Glitter! We used about 1/2 tsp or less of superfine glitter, with a pinch of stars. Then I layed a line of silicone glue around the neck of the jar, to glue the lid on. My son is very curious and he is good at puzzles, so I don't want him to have the idea that the lid ever would come off. We screwed the lid with the tree on, and I tightened it. 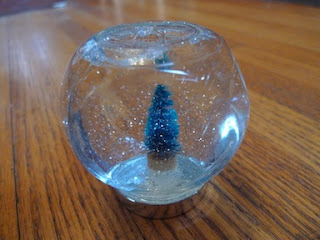 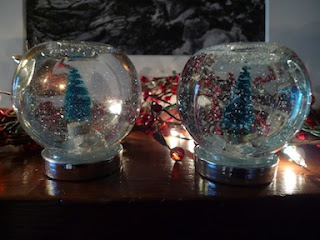 Now, we also tried mixing in some regular clear glitter with the superfine silver. We found that it makes larger flakes, and clumps up a bit. The superfine leaves a more delicate, magical effect. But that's purely subjective.

Makes a lovely gift, though! 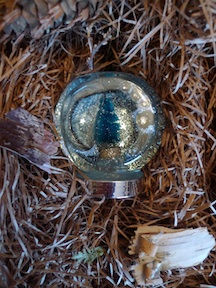 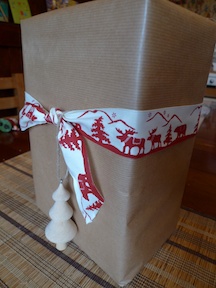 Do you have any snow globe memories you'd like to share? Leave them in the comments below.

*I later found out you are supposed to use distilled water, rather than tap water, in the snow globe to keep the water from going "bad" and turning colors over time. I guess we'll try that next time!

Join us at some linky parties! The Magic Onions and Natural Suburbia. Both have really awesome Friday linkups with about a gazillion ideas each week.