We're reading a special winter / holiday book throughout December, and promoting some family together time with activities and crafts. 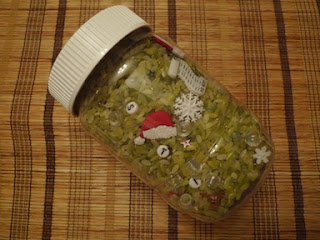 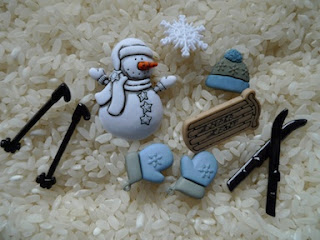 Starboy has seen the stacks of over-designed cutesy buttons and he has been dying to get his hands on them. After putting him off for three days, I couldn't say no any longer.

And maybe that's only partially because I didn't have much else planned—I had too many snowman ideas to match today's book and I couldn't decide on one. So Starboy decided for me. 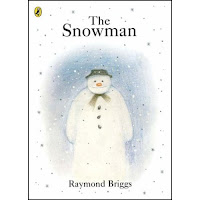 The Snowman
by Raymond Briggs
A wonderful no-words story about a boy's adventure with a real snowman. 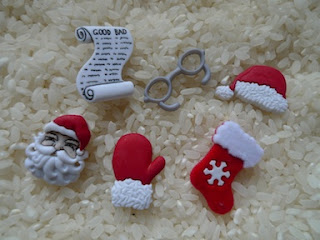 Now if I had been smart, I would have stretched these little gems out for two or three days...offering a sensory bin like the incredible ones on Counting Coconuts, then switching it up, like: Same items on the light table, or a tweezer game or something, and then making the I Spy jars.

But no. That would have required at least minimal planning. 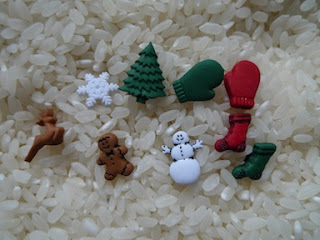 So we went straight into the crafting and gifting. Shrug.

Materials:
•Buttons and geegaws from craft store relating to a theme, OR
•Junk from around the house (a paperclip, penny, button, earrings, game pieces, whatever)
(about 16-20 items)
•Snippers to cut the button loop off the back
•Camera, to photograph buttons
•Clean juice or PB jar (one per child—this is a hard game to share)
or use a spice jar, with teeny tiny buttons
•Silicone glue to glue lid onto jar
•Sticky label to write items outside of jar, for readers
•Filler: glitter, pony beads, glitter stars, seed beeds, bugle beads, extra buttons
•Rice, beans or lentils
•Food coloring, hand gel, zipper bags, cookie sheet for dying rice (optional)

Tips:
•Check out Etsy and Google for a billion ideas on this project
•The commercial version is called Find It. It's $20, and the thing is huge.
•Shop ahead for sale prices on the little buttons
•The alphabet beads packets are usually "light" on vowels, so over-buy if you have a lot of words to spell.
•Get the right kind of snippers so the whole loop comes off when you cut
•Dye your rice several days in advance
•Don't forget to photograph the buttons before they go in the jar
•Plan ahead a couple of weeks to save your jars
•Wash your hands when you finish the project. Buttons aren't "toys," so who knows what's in the paint, etc. 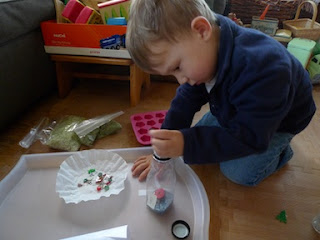 This project was easy for us because we already had all the stuff: The buttons, the bottles, and I'd even saved some colored rice from another project. If you are starting from scratch, you'll need to actually plan ahead a bit.

The rice is what takes the longest. You can Google "dye rice" to learn how, but it's basically about a tablespoon or less of hand gel, about 20-30 drops of food coloring and however-much rice in a zipper bag. Mix it up, then lay it al out for a few days on newspaper on a cookie sheet, to dry it. Or you can try dying it with Kool-Aid, which may or may not be a more granola approach, depending on how you look at it.

The next thing is, you have to cut the little loops off of the backs of the buttons. If you don't do this, the button will "surf" the rice face-down and you won't be able to see what it looks like. You can buy buttons without the loop on the back if you're savvy (I think they're sold with the scrapbooking stuff), but, I just bought the snippers instead.

The rest is as you'd expect. Choose your gems/buttons. If you want a photo key, then shoot your picture now. I like the photo key for non-readers and early readers. If you laminate the photo of the gems, then the child can play his own game finding the gems then marking them off on the key with pawn, dry-erase marker or grease pencil. I like having photos on one side, and words + photos on the other side, to further the learning, but that all depends on how OCD you are. (I haven't done mine yet. Grandma and Grandpa have a good printer and a laminator, so I hope to finish up this week.)

By they way, I've done a spice-jar version of these for the car, with teeny tiny buttons. So. Fun. I want to try the alphabet one that Counting Coconuts did. Such a great idea! In Starboy's jar, above, the letters spell "Christmas" and his first name. 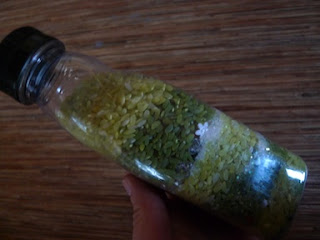 Add a little rice to your jar, then some gems, then some glitter and filler. Lather, rinse, repeat. If you layer it a bit, the buttons distribute a little more easily than if you dump them all together.

When you think you are finished, put the lid on and try to "find" stuff. This is a test to see whether the amount of rice is satisfactory. Make adjustments as necessary.

If you are sure you are finished, glue the cap on.  Allow to cure according to directions on packaging. That's it!

There are tons of games you can play with these jars, like:
• I find a thing, then you find a thing
• Identify the letter
• Match the letter to flashcards
• Find the letters of a word
• Find them in order (for car trips, ha!)
• Find all the things that are red..or round... (etc.)
Posted by bug at 11:28 PM