We've been doing a special activity or craft every day throughout December as we wait for Christmas! 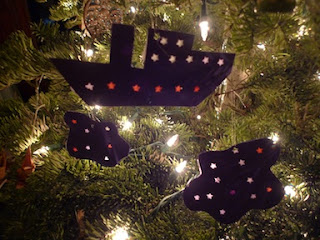 Starboy has been asking about a project that celebrates the "winter night sky" since he heard Miss Molly's story about the lantern carrier. Why not?

This is a very simple project I saw online recently, and forgive me but I can't find the link now. Likely via The Crafty Crow or Artful Parent. 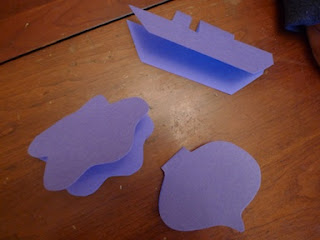 I cut out simple shapes from construction paper. I cut them on a fold so they would have two pretty sides, but wouldn't have to be aligned again later. If you do them one-sided then the back looks pretty sloppy.

I had planned to use black construction paper, but couldn't find any around the house. So we used dark blue. 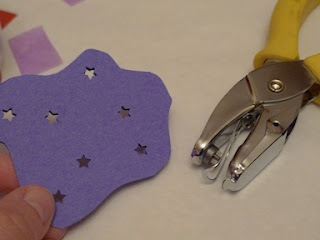 We used the star hole punch. The hole punch required more power than Starboy really was able to offer, so as an independent project, this was a bit of a flop. We punched the stars together. You punch through both sides as though it were one paper. 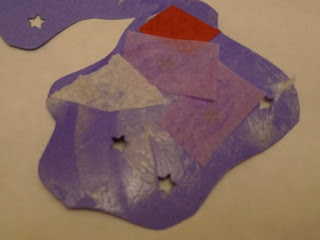 We opened up the cloud, then applied glue stick all over. Starboy covered the holes with bits of pre-cut tissue paper. I kept the palette to purple, red and white, but had I had a better arsenal, I would have added more colors.

Then we closed the sandwich back up again, sealing the tissue paper inside. An extra hole allows for a thread hanger. 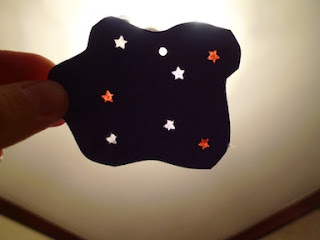 Stars and a cloud in the night sky. Starboy really was happy about the cloud, since Martin's daddy is an avid cloud painter in the Martin and Sylvia stories on SparkleStories.com. 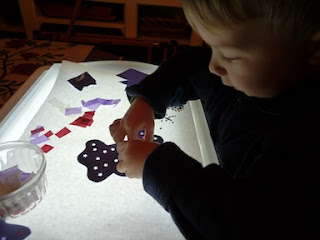 It didn't take me long to realize this would be a much better project on the light table. So we put Starboy's work tray right on top. It definitely increased the fun factor, and after four ornaments, he was gunning for more. 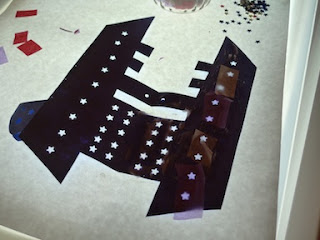 For some reason, he really wanted some ships for the night sky. We made two. I utterly vetoed the train he wanted. What, I'm a scherenschnitte expert? Not.

I really recommend this activity. It was a lot of fun, high interest, super cheap to put together, and with stuff you likely have around the house already. These would make great gift tags! 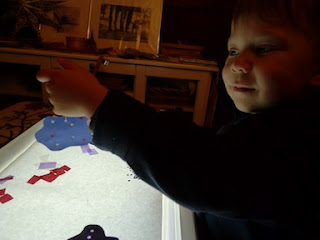 I could have paired this project up with Owl Moon by Jane Yolen, or myriad other books, but frankly, I felt a little burned out today so I grabbed an oldie but a goodie, because it was within arm's reach: 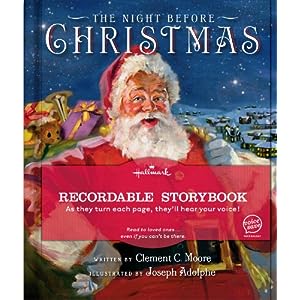 The Night Before Christmas
by Clement C. Moore and Joseph Adolphe
Apparently the "'Twas" is too complicated for today's family to handle and it's been dropped.
The classic story, with decent illos.
Ours includes a recording of Starboy's grandpop reading the story, but we need to find some batteries to make it work.
Posted by bug at 10:13 PM