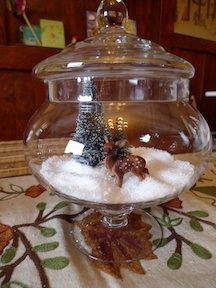 So many thanks to Donni of The Magic Onions, who suggested epsom salt for the snow. I'm hoping to find some glass jars for smaller scenes to give as gifts—like I've been seeing in the ornament section in Cost Plus—but today we made a classic centerpiece, to go with the book of the day: 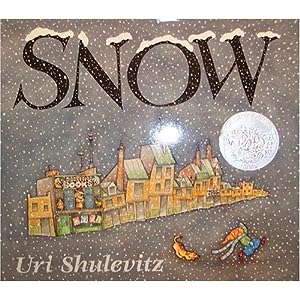 Snow
by Uri Shulevitz
Lovely, calm watercolor illustrations with a simple story about a child's view of a snowstorm. 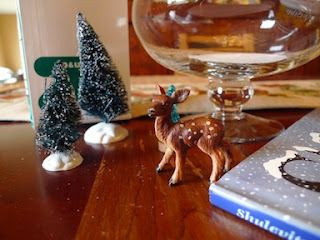 We started with two trees from Michaels (they have a snow village series—but the deer were all sold out, nuts!), a plastic fawn, an apothecary jar and a leftover box of epsom salts. And a small piece of scrap cardboard, cut into a circle.

I considered a bunch of other animals: Bears, polar bears, harp seal pup, buck and doe, racoons peeking out of a trash can, and other stuff that's rattling around the house....but the baby deer seemed to have the best vibe, scaled with the trees, and actually fit in the jar.

It looks like we found nearly the same jar as Donni's family did, though I'm sure we paid more — she's a yard-sale wiz and somehow manages to find things I can't even find in the stores. (Like, where did she get those gorgeous tiny deer?) 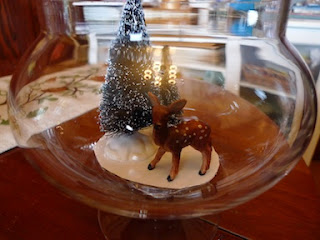 The cardboard is to keep the figures from toppling easily. Although once the salt is in there, it's probably not too much of an issue, I realized later. 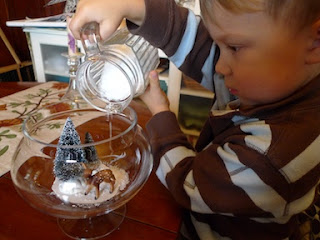 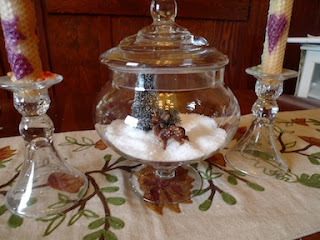 Voilà! Instant spendy beauty, for a mere fraction of the cost!

Once the materials were assembled, I swear this project took less than five minutes. And so addictive!

Starboy has been trying to figure out how it can "snow" in there, but I explained to him that this one isn't interactive, and it's just for looking (mostly so the stuff doesn't topple). But if he does play in it, it's no big deal—the deer is a toy, the epsom salt is pretty safe (as long as you're near the potty, ha ha), and it's just the trees from China that would give me any concern. But I'm not too worried about it.